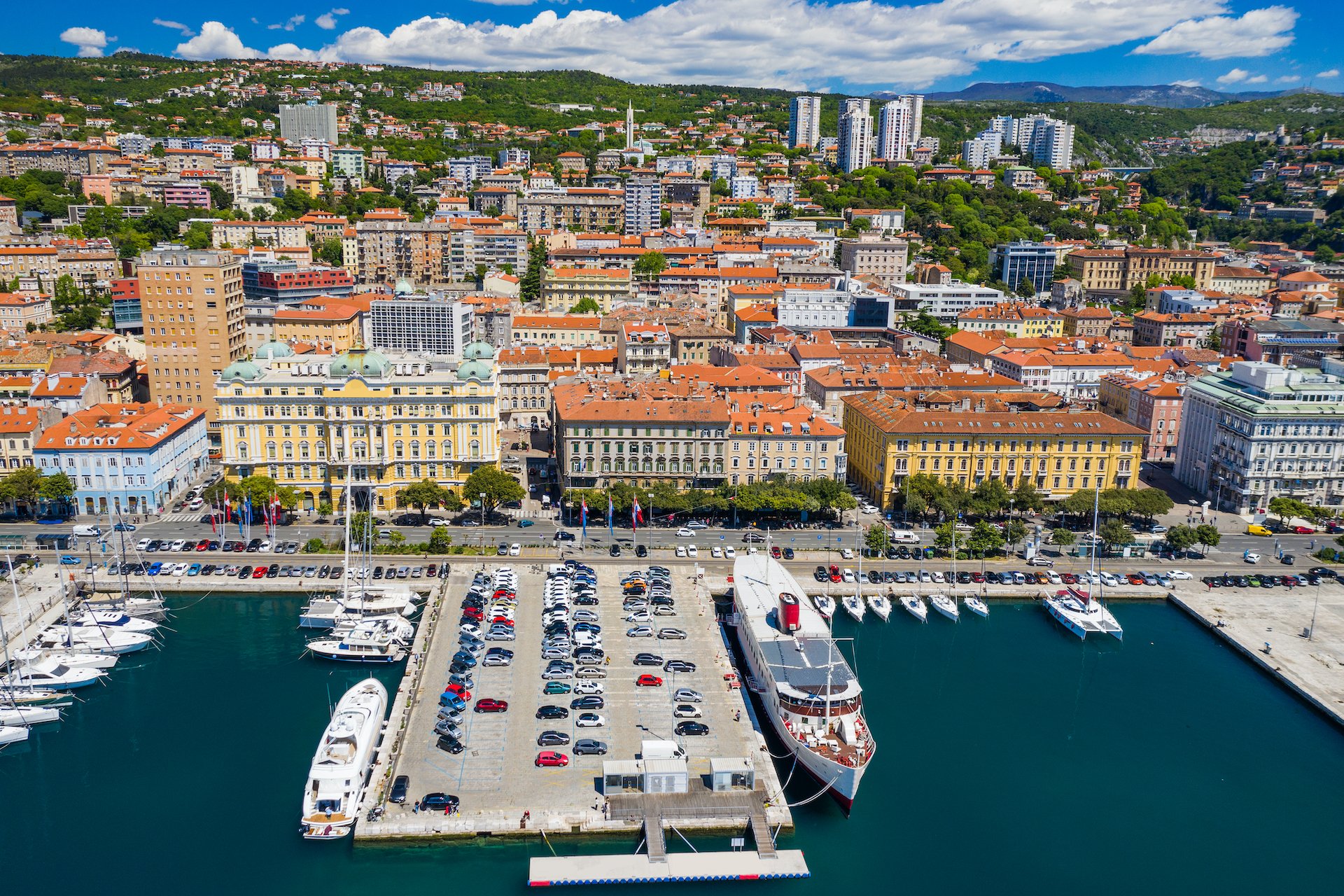 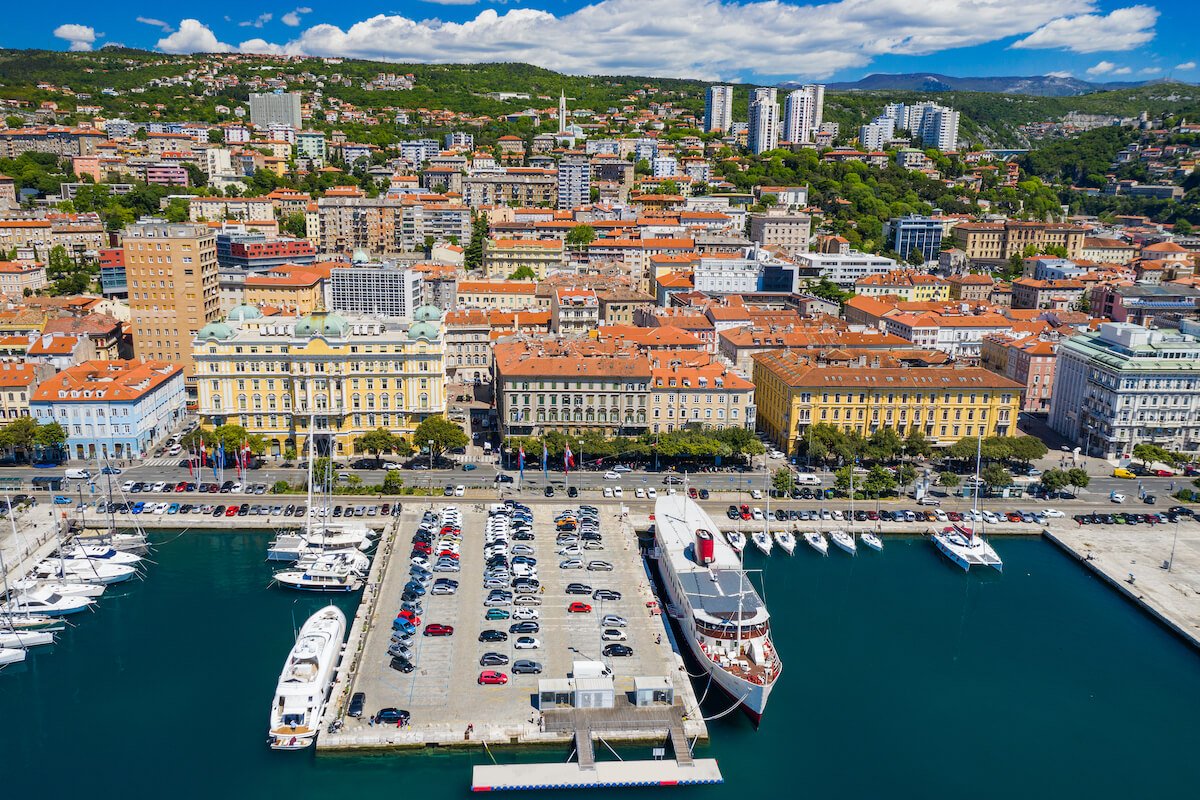 Rijeka has been chosen to be the European Capital of Culture 2020 (ECC). This tells a lot about how cool Rijeka’s cultural life is and amazing historical locations that you can check in the city. Here we bring you top 5 historic sights in Rijeka. Immerse into the amazing history and learn about the unique industrial heritage. You’ll see how easy it is to fall in love in this city. As the owners of Number1Apartments, we have been living in Rijeka all of our lives. Still, we find something new about the city every day. There are so many unique places hidden from the sight! So, if you get really curious about the city and want to explore something beyond this list, feel free to contact us anytime. We would love to share more historic jewels with you. 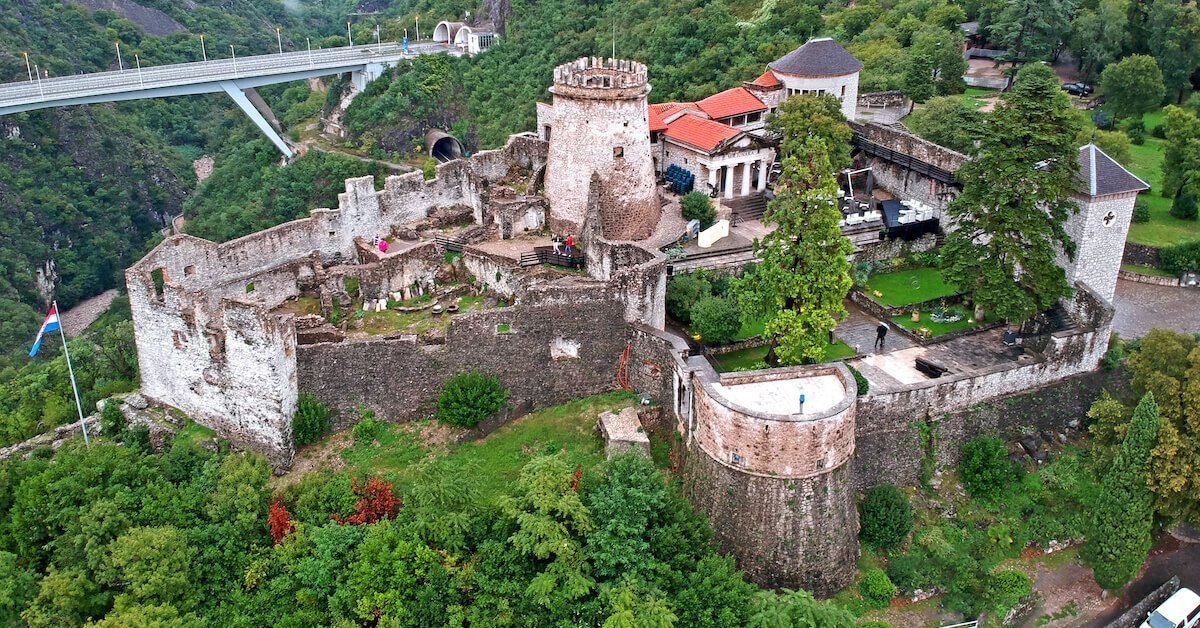 No 1 historic sight in Rijeka:  Trsat, the castle in the sky

Before you start your journey in the city, you ought to start from Trsat castle and learn a bit about its history.

The earliest evidence of man´s presence in the Rijeka region of today date back to the Palaeolithic and Neolithic ages. The Trsat Hill, overlooking the Rjecina River, dates back to the bronze and iron ages. Later, it secured the port in the time of the Illyrian tribes (Liburnia). The Romans relocated the town centre closer to the sea, at the site of today´s Old Town. Roman Tarsattica developed into a major seaport and trading town.

Slavic nation – the Croats – overtook Tarsattica and built two settlements: TRSAT on the hill on the left bank of the Rječina River at the site of the previous Liburnian settlement TARSATA, and RIJEKA on the shore-line at the site of Roman TARSATICA.

Today Trsat is a place of castles, forts, churches, monasteries and one of the best coffee shops in the town. We’ve wrote a detailed blog on Trsat, so make sure to check it out before you visit our number 1 historic sight in Rijeka. 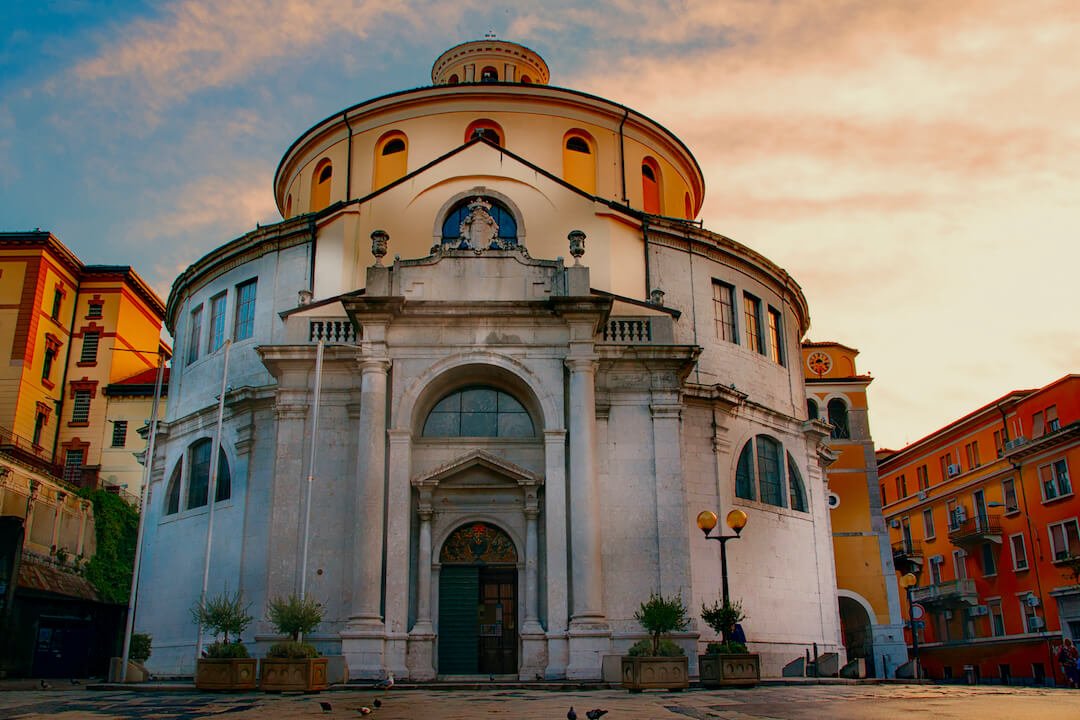 No 2 historic sight in Rijeka:  The church of St. Vitus

Rijeka during 13th century was a small fortified town, enclosed within the town walls which had several defense towers. The town was divided into two parts: in the upper part, there was a medieval castle and the church of St. Vitus (thus the name Flumen Sancti Viti), while the lower part – the popular, commercial and trading center – was commonly known to its inhabitants as Rika or Rijeka.

St. Vitus’ Cathedral, you see today isn’t the original church. Initially, there was a small church of the same name, dedicated to the city’s patron saint. The Jesuits, as the creators of the project, primarily decided to use the cult of the Miraculous Crucifix from the small church, which, according to popular legend, started bleeding when a certain Petar Lončarić threw a stone at it after exploding with rage over a gambling loss. The early Gothic crucifix is incorporated into the Baroque main altar of the new church, which, in the spirit of storytelling piety inherent to miraculous relics, also houses Lončarić’s stone and a small bronze hand.

St. Vitus’ Cathedral is the only Baroque rotunda of monumental proportions built on Croatian soil. The construction of this church, designed by the Jesuit architect G. Briano, began in 1638. It was made on the model of the famous Venetian church of Santa Maria della Salute. You can find more about the history of this church here. 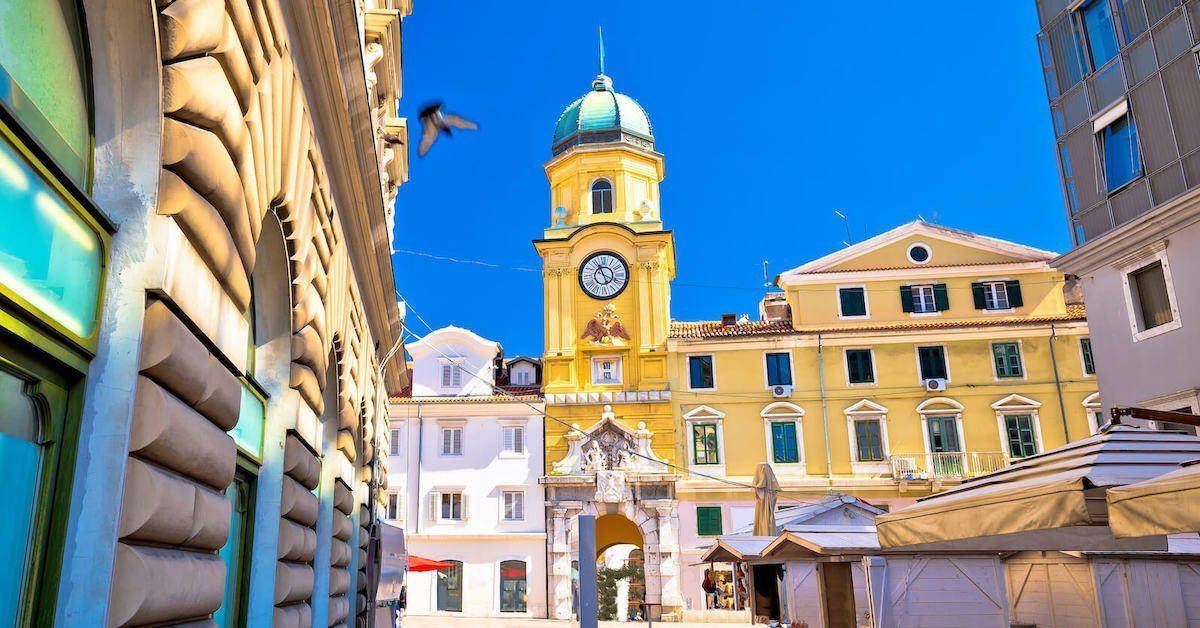 A significant economic upswing of Rijeka began in the 16th century with trade in iron, coal, wood, wool, cattle and leather. The golden age of Rijeka trade suddenly weakened in the second half of the 16th century by frequent attacks by the Turks, wars between the pretenders to the Hungarian thrown, as well as long struggles between the Uskoks and Venice.

The Rijeka economy began to flourish again in the 18th century. At that time, the Emperor Charles VI proclaimed Rijeka a free port. Shortly after, however, Hungary, a rising power within the Habsburg Monarchy, began to perceive Rijeka as its gateway to the world. At the turn of the 18th into the 19th century Rijeka was under French rule and then again under Austrian rule.

City Tower, a symbol of Rijeka, which leads into the fortified town was built in the Middle Ages. Some baroque phases of its construction can be seen on the lower part of the front of the Tower, which are characterised by a richly decorated portal, an imperial coat of arms carved out of stone and a relief of the Austrian emperors Leopold and Charles VI. Rijeka paid them special respect due to the maritime orientation they introduced into the state policies of the Austrian court.

You can find out more on the history of the City Tower here.

The symbol of Rijeka – City Clock Tower watches over the promenade called Korzo. We’ve wrote more about the long and broad Rijeka’s promenade in the blog Top 5 things to do in Rijeka. 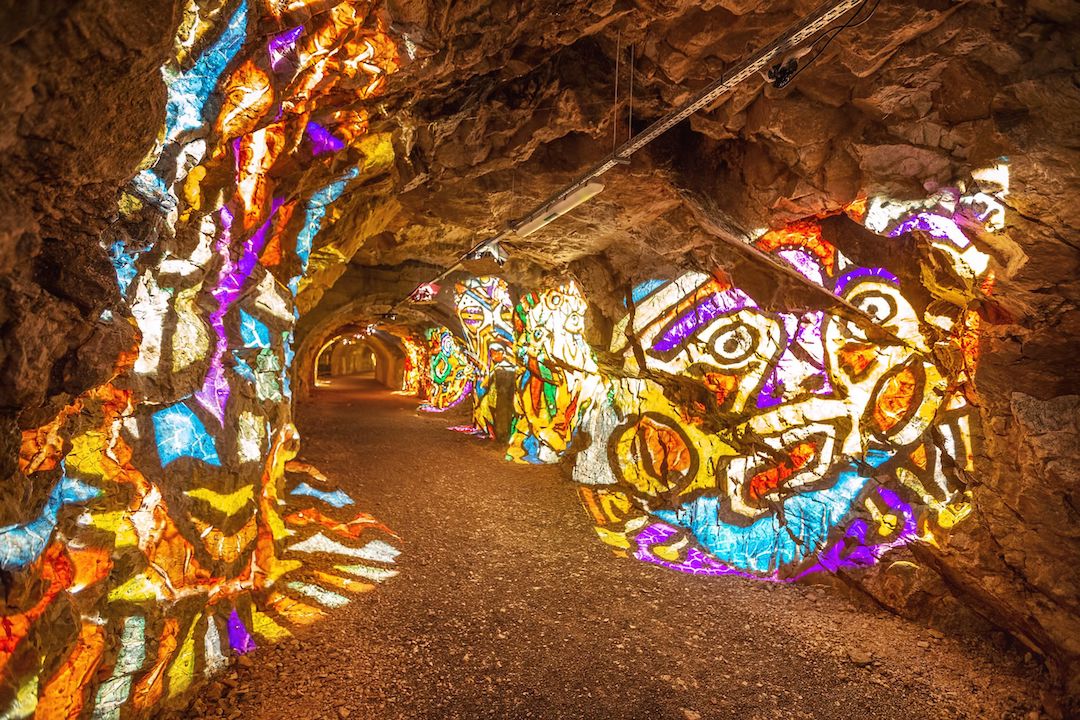 No 4 historic sight in Rijeka:  The Rijeka Tunnel

In 1848, the year of civic revolutions, Rijeka was united to the Bans (Viceroys) Dominion of Croatia.
The struggle for Rijeka between Croatia and Hungary continued to escalate and Rijeka came under the direct rule of Hungary. Rijeka rapidly developed into the largest Hungarian maritime and seaport emporium.

Upon the fall of the Austro-Hungarian Monarchy in 1918, Rijeka and Sušak became a part of the State of Slovenes, Croats and Serbs, but shortly afterwards, it was occupied by the Kingdom of Italy.

The economy of Rijeka deteriorated rapidly and Rijeka was transformed into a small provincial town. Sušak, which had become a part of the Kingdom of Slovenes, Croats and Serbs with Belgrade as its capital, enjoyed at that time prosperity through the broad hinterland with which it was united.

Rijeka, together with neighbouring Istria, was the first in the world to give resistance to fascism and during World War II, it was a part of the anti-fascist front. Following the capitulation of Italy in 1943, Rijeka and Sušak were occupied and held by the Germans until liberated on 3 May 1945.

During that time The Rijeka Tunnel was built. The first military tunnel opened exclusively for tourist visits is waiting for you in the very centre of the city.

The entrance to the tunnel is located next to the Cathedral of St. Vitus and it stretches below the Old Town. The 330-m long tunnel, which was dug into bedrock from 1939 to 1942 by the Italian military in order to protect civilians from aerial bombings, descends to a depth of 10 m in several places. It is 4 m wide and 2.5 m high on average. The main tunnel bore branches off in two directions, one leading towards the old city hall building and the other to the Cathedral of St. Vitus.

You can find out more about Rijeka’s tunnel here.

No 5 historic sight in Rijeka:  “the Big river” & “the Dead channel”

According to the Peace Treaty of 1947 held in Paris, Rijeka was once again reunited with  within Yugoslavia. Two years later the towns of Rijeka and Sušak were joined to form the single town – Rijeka. Rijeka emerged as the mayor sea-port of socialist Yugoslavia.  Towards the end of the 20th century, Rijeka was a developed urban and industrial centre.

If you take a walk down river Rječina (which is Croatian for “big river”), you will practically be walking down the former border between Italy and Yugoslavia. The Mrtvi kanal (meaning “dead channel”), a former riverbed of the Rječina river, is currently used as a small port for boats. It was the central point of the inglorious historical episode of the division of the city into two parts.

It is here that pope John Paul II spoke to Rijeka’s inhabitants, and it is here that Tito’s famous speech about Rijeka’s reunification after Italian occupation is permanently preserved on a stone plaque, as well as the monument to Rijeka’s liberation. From the more recent past, we remember soldiers from Rijeka who left for the battlefields from Delta and fought in the Croatian War for Independence, which is why the Bridge of the Croatian Defenders was built across the Mrtvi kanal channel.

You can read more interesting facts about river Rječina and Mrtvi kanal here.

If this got you intrigued, make sure to read more on Rijeka’s history on The City of Rijeka webiste.
← Nature park Učka - top choice for the fans of the outdoors All Rijeka Events in May 2022 →

FRIENDLY WARNING: Due to COVID-19 restrictions which are changing on almost weekly basis and could affect the organization of events and working hours of bars, restaurants and nightclubs. Feel free to contact us if you have any concerns or questions. Also, you can get up to date info on the official Croatian Government dedicated site  and Total Croatia News portal with special section on traveling during pandemia.

You can also pay via:

We promote the well-being of our community during the COVID-19 pandemic and by keeping your and our health and safety in mind. Therefore, we practice social distancing and avoid personal contact with guests unless it is truly necessary. Also, we conduct an enhanced cleaning and disinfecting protocol with emphasis on high-touch areas (door handles, light switches, etc.).

We have implemented a self-service check-in as a COVID-19-friendly way to welcome guests into all our apartments. Although we do not meet you in person, rest assured we are still at your disposal.

We are guest satisfaction oriented. Hence, we do our best to justify the status of quality mark for Rijeka vacation homes we have gained throughout the past years during which we have hosted numerous guests. They have one thing in common: they all sought a comfortable, well-appointed, and centrally located apartment in Rijeka, and that is why they chose us.

With high-quality accommodation and exceptional customer service we want to inspire you to book with us again, and to recommend us to your friends and family.

You can find out more about which cookies we are using or switch them off in settings.

This website uses cookies so that we can provide you with the best user experience possible. Cookie information is stored in your browser and performs functions such as recognising you when you return to our website and helping our team to understand which sections of the website you find most interesting and useful.

Strictly Necessary Cookie should be enabled at all times so that we can save your preferences for cookie settings.

If you disable this cookie, we will not be able to save your preferences. This means that every time you visit this website you will need to enable or disable cookies again.

This website uses Google Analytics to collect anonymous information such as the number of visitors to the site, and the most popular pages.

Please enable Strictly Necessary Cookies first so that we can save your preferences!